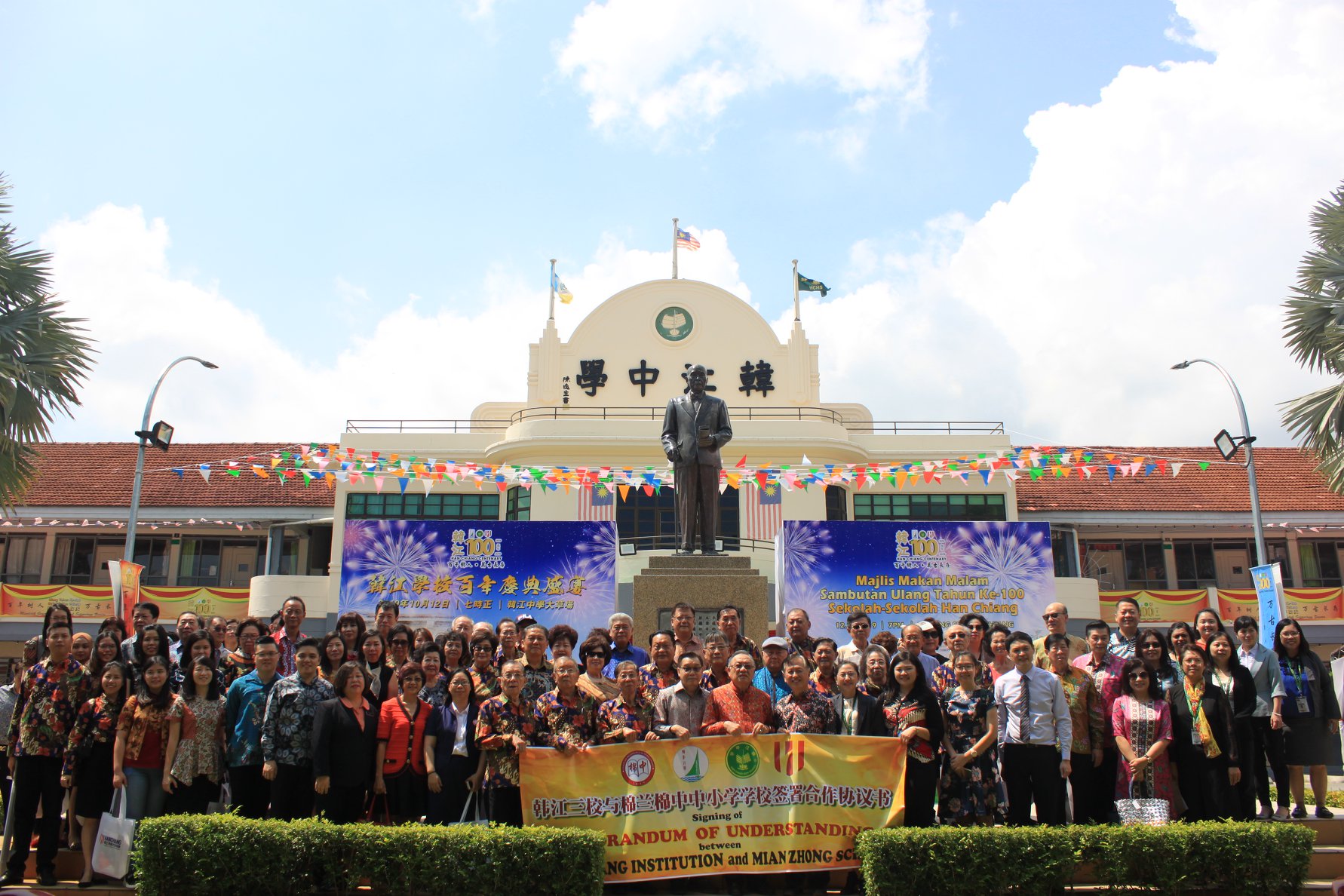 A hundred years ago in 1919, Han Chiang School was founded by the Teochew Association and Mr Lim Lean Teng, standing on Chulia Street with a modest facade. A hundred years later, although having been moved to Lim Lean Teng Street and equipped with improved facilities, Han Chiang School continues to provide wholesome and quality education to thousands of students from various countries such as Malaysia, Thailand, Korea, and Japan.

On 12th October 2019, in conjunction with our school’s centenary celebration, the three Han Chiang Schools jointly held a grand dinner in the field of Han Chiang High School. The aim was to unite each and every member of our school, be it students, alumni, or teachers, to celebrate the wonderful occasion of the centennial anniversary of our school, one of the greatest milestones in the history of Han Chiang. The dinner received an exemplary response from the students and faculty with approximately a whopping number 10,000 attendees. The event kicked off at 7 pm sharp.

The Finance Minister of Malaysia, YB Lim Guan Eng, started off his speech with the best wishes from the Malaysian government upon the success of our school. He stated that having experienced innumerable ups and downs along our journey towards the centennial year, our accomplishment was worth everyone’s respect and admiration. As a gift for our centennial anniversary, the Ministry of Finance decided to allocate us with RM100,000, in the hope that our school will continue to strive in the future. “Although this is not considered as a huge sum of money, it is of great significance as this indicates that the government has acknowledged the contribution of independent schools in our country.”

During his speech, the Chairman of the board of directors, Dato Seri Ooi Soo Hing, stated that Han Chiang School has been faced with countless obstacles and difficulties in the past 100 years. However, the members of our school managed to overcome all of those by maintaining the spirit of persistence and perseverance. The fruitful outcome of the three Han Chiang schools wouldn’t have been completed without the contribution of our ancestors who worked hard and dedicated their lives to the growth of Han Chiang.

“Education is the foundation of everything.” Dato Seri Ooi Soo Hing also mentioned that in the process of cultivating and instilling the all-round virtues in the education system, we must also courageously face the rapidly transforming era of technology. Whether it be the slogan Mr Lim Lean Teng pronounced during the groundbreaking ceremony 100 years ago, or the motto we are using now, they all carry the same meaning, that is, paving the road for the next generation. He would also like to use this opportunity to express his gratitude to the Executive Advisor, Tan Sri Dato’ Seri Tan Kok Ping, who had generously agreed to construct a new building for Han Chiang Primary School consisting of 20 classrooms.

The gala dinner commenced with the singing of the National Anthem, Penang State Anthem and Han Chiang Primary School anthem. After that, a vocal performance by Han Chiang Alumni was presented. Their melodious voice enveloped the field and won a huge round of applause from the audience. There were also other performances such as an enthralling skit named ‘The Pride of Han Chiang’ prepared by students from Han Chiang University College, a dance performance with the title of ‘Han Chiang Airlines’ presented by Han Chiang High School’s choreography dance club and a choir performance by students from the three Han Chiang schools. Besides that, our sister school, Khunnatam Wittaya, also graced us with their appearance on that day. They sent a total of 32 students to perform a Chinese dance and a Thai dance which were contrasting to the usual performances as they were filled with the traditional culture from Thailand.

During the long stretch of performances, there was a six-course meal provided. A mock cheque presentation also took place during which YB Lim Guan Eng handed over the funds issued by the Ministry of Finance. In the meantime, there was an exhibition held in the hall to display the projects of the students during the past year to allow the public to have a better understanding regarding the activities included in our daily schooling routine.

Madam Khaw Hoay Lean, an alumnus who graduated in the year 1975, stated that she felt overjoyed and excited as this was a rare opportunity to gather with her old schoolmates. She described the event as enjoyable and entertaining as the performances were really wonderful. She also mentioned that the facilities of our school have improved immensely compared to her schooling days a few decades ago. She wished the best for Han Chiang School and hoped that it will continue to pursue for the better.

Mr Tan Chong Boon, a Han Chiang alumnus, stated that he returned to Penang from Hong Kong especially to attend this centennial event. As this was the first time he stepped foot into Han Chiang since a long time ago, he was touched when he witnessed our school’s improvement and changes, especially the teaching materials which were taken to great heights in the educational world. He hoped that Han Chiang will continue to work harder and nurture a whole new generation.

Warunee Sae-Chang, one of the performers from Khunnatam Wittaya, stated that this was the second time she visited Han Chiang High School, with the Summer Course being the first visit. She was elated that she got to celebrate our centennial anniversary together. They had prepared two different dances, hoping to make known the Thailand culture to us Malaysians. She wished to congratulate Han Chiang on its hundredth year celebration.

At 10 o’clock in the evening, the Han Chiang Centenary Gala Dinner was wrapped up with a colourful and majestic display of fireworks. Everyone left with another sweet memory created in Han Chiang.