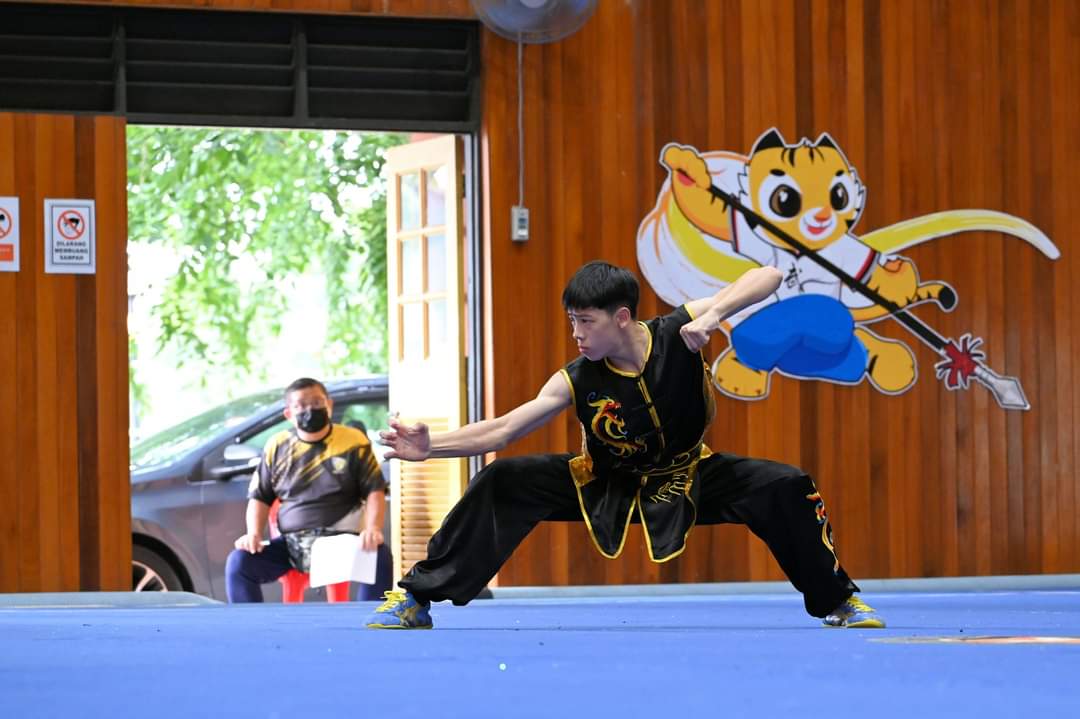 于11月12日，武术俱乐部的学生们参加了在Dewan Silat MSNPP举办的MSSPP武术比赛。 该比赛大约有一百名来自不同学校与年龄段的参赛者。其中，韩江中学的两位参赛者——来自JSE13的许展铨和来自J13的哈妮在比赛中都双双取得了优异的成绩。
来自JSE13的许展铨在采访中表示他对自己的成绩没有感到很意外，在他的预期之中。 他还指出该比赛并不如他想象中的具有挑战性，因为在他年龄段的竞争对手并不多。 他透露道，从9岁开始偶尔参加武术俱乐部和国家训练，并一直坚持到今天。许同学认为武术是一项极具挑战性和难度性的运动，训练时一定会面对挫折与困难。 因此，他向那些有兴趣从事这项运动的同学透露道，一定要有意愿和决心，自律，学会克服一路上的各种障碍。另外，许同学也非常感谢父母给予他的所有鼓励与支持，也感谢他的教练不断地帮助他。
来自J13的哈妮在采访中提出，她是因父母的缘故在七岁时开始接触到武术并对武术这项运动感兴趣。 虽然她的训练时间长达六小时，但是训练结束后她会准时复习，合理安排学习与训练时间。 因此，她很庆幸自己的努力终有了回报。她说道，当她看到其他竞争对手时，会感到紧张，但她通过一些呼吸练习让思绪平静下来，缓解紧张和焦虑的情绪。同时，哈尼同学指出，如果要参加这项运动，一定要认真对待并努力训练，即使输了比赛也不要轻易放弃。她透露，成功的秘诀只有坚持到底和永不放弃，因为你不放弃还有机会，可放弃却连机会都没有了。
在他们身上能看到如此坚定的决心和努力，在年轻学员中已属少见。不要小看自己的潜力，低估自己的未来。相信他们仍旧会砥砺前行，为更美好的未来奋斗。
The MSSPP Wushu competition at Dewan Silat MSNPP captivated the hearts of a handful of students from the martial arts club of HCHS. There were at least a hundred competitors in total ranging from different schools and ages. Incredibly, two of our school’s participants — Skyler Khor Zhan Quan from JSE13 and Hanny Syaqiera from J13 came back proudly with flying colours.
Skyler
Skyler Khor, a top student in JSE13, had gotten first and runner-up in the MSSPP Wushu competition. Surprisingly, despite being excellent and achieving proficient sportsmanship, he also excels in academics and is the pride of the school. As he holds high expectations for himself, he stated that he wasn’t content or disappointed with the result. Not only so, but he also pointed out that it wasn’t as challenging as he had preassumed because there weren’t as many competitors in his age group as he would’ve expected. Actively, he occasionally joins club and state training since the age of nine and has kept it up to this day. He admitted that there were hardships and frustrations along his journey as martial arts is highly challenging and arduous but although so, but he overcame it with his strong determination, will and strong love for martial arts and never had the thought to give up. When there’s a will, there’s a way.
Therefore, he advises the students who are interested to take up this sport seriously to build up self-discipline and have the willingness and determination to be able to learn to go through and overcome various kinds of obstacles along the way. Despite being grateful to his parents for providing him with the necessities such as transportation and money to be able to continue his love for martial arts and having such supportive parents, he would also like to express his gratitude to his coach for providing the best training, motivation and mental strength that made him the athlete he is today. Without their help, he wouldn’t have been able to be the shining star he is at this day, and his rising athlete career for the future.
Hanny
Since the age of 7, Hanny had begun to train and learn martial arts as it was when she was influenced by her parents. In her everyday routine, her training goes up to six hours and she punctually revises her studies after training to balance her time well. Not only does she work hard for her dream, but she also occasionally maintains her school studies. Hence, she is very thankful for the fact that her hard work has finally paid off, making herself proud.
Although she was quite nervous about the competition when she first had a glance at other competitive opponents, she managed to calm herself down by doing some breathing exercises and having mentally supported by supportive comments and her parents. Hanny advises the students to take this sport seriously if they were to join it and don’t give up easily even if they lost a competition. Things may not be easy as it seems at first but as long as they strive their hardest and keep on the burning passion, it will get easier in the future.
To be able to see such determination and hard work truly is an eye opener as they are not common to find in young students these days; the future of martial arts is in solid hands. Nevertheless, they will continue to strive hard and build themselves for a better future.
Comments for this post are closed.