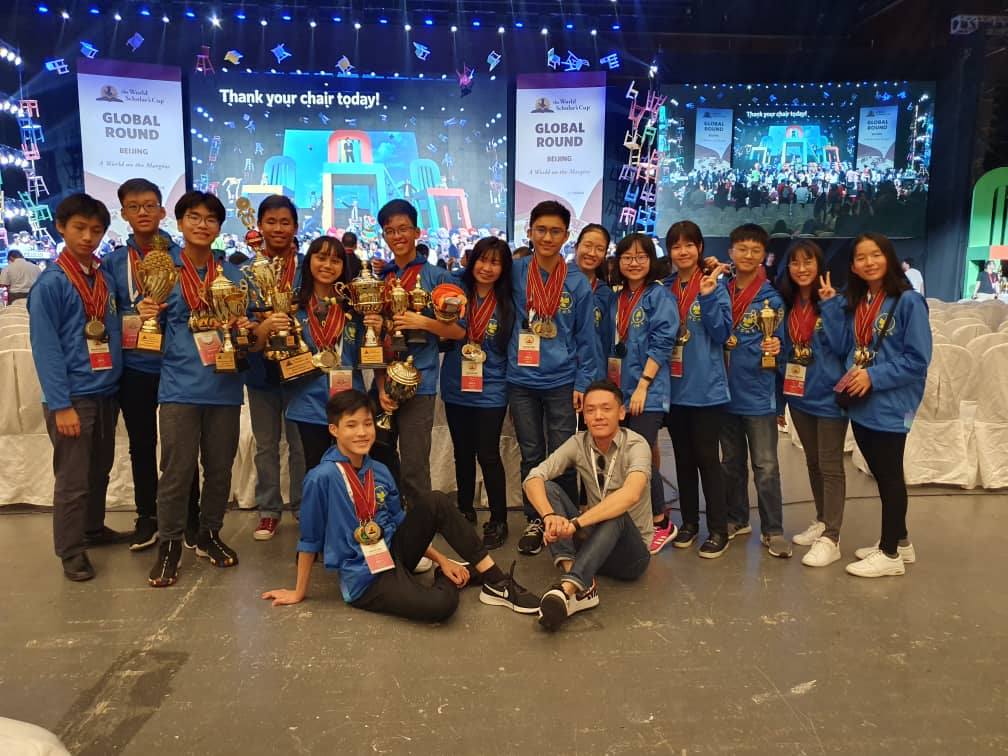 On the 21st to 26th of June, 31 students from Han Chiang High School had embarked on a journey to Beijing, China to take part in the largest Global Round ever held by the World Scholar’s Cup. This year, the outstanding scholars returned triumphantly once again with a staggering amount of 105 gold medals, 169 silver medals and 12 trophies.

As the delegation of Han Chiang advanced to the Beijing Global Round, they had to compete against 4,500 scholars from over 50 countries, with more than two thousand people in each division. The six-day tournament took place at the China National Convention Centre. The competitive events included the Scholar’s Challenge, Collaborative Writing, Team Debate and Scholar’s Bowl. All scholars were required to study six different subjects related to the theme “A World on the Margins”, which ranged from Science and Technology to Arts and Music. Meanwhile, the community events comprised of the Debate Showcase, Scholar’s Show, Scholar’s Scavenge and Scholar’s Fair, in which scholars from various countries showcase their talents and learn about the diverse cultures of others.

The best-performing team of Han Chiang from the senior division, which comprised of Sarah Swea Enqing, Rhowan Ho Rui Yang and Hoven Ewe Wei Ler, clinched the trophy for the third place overall team. The team also placed first in the Challenge, second in Writing, and 20th in the Bowl. Moreover, they emerged as the champion team in the Southeast Asia region. Sarah Swea, the school’s top scholar, returned gloriously with equally satisfactory results. Individually, she took the 1st place in Writing and 4th place in the Challenge. Overall, she was awarded as the champion of the Global Round. Hoven Ewe also did well by bringing back trophies for placing 10th in the Challenge and 18th for champion scholars. As for the junior division, Estelle Sia also won a trophy for placing 13th in Writing.

Mr Samuel Ong, the teacher advisor of this impressive delegation, expressed that he experienced mixed feelings when witnessing the students’ achievements. “I felt ecstatic as well as worried: happy for the seniors and concerned about the juniors.” Mr Samuel stated that he was very proud of the senior scholars as they had succeeded in proving themselves as one of the best in the world, especially Sarah Swea, who attained the finest results among them all. However, for the juniors, he was afraid that they won’t be able to emulate their seniors and were enduring tremendous pressure. As the saying goes: practice makes perfect. Mr Samuel was determined to train them into diligent and bright scholars as he could see a lot of potential in them.

“For the Global Round, we had been preparing since January this year.” Mr Samuel explained that as soon as the syllabus was released, the students had started to form groups of three and study the subjects in order to achieve adequate results. He strongly believed that along the preparation journey, intelligence was not the quality of utmost importance. On the contrary, he expressed that one should excel in discipline to unleash the best of their potential. They had to have a good idea of ideal time management since finding a balance between schoolwork and co-curriculum activities was not a simple thing to do.

Sarah Swea, the overall top scholar of the Global Round, stated that she was utterly shocked and elated when she found out that she was indeed the best among the thousands of scholars in the senior division. “I’d spent a few months before Beijing preparing for the worst, because I felt that after regionals, any performance would be underwhelming.”

Describing the World Scholar’s Cup as a full-time extracurricular activity, the top achiever expressed that a major obstacle she faced was juggling school work and preparation for the Global Round. She had to complete assigned homework on the school day itself to make time for studying for the WSC when she got home, which was fairly exhausting at times. She even cut out any free time altogether in the weeks nearing the Globals to focus on the tournament. However, she stated that she wouldn’t have been standing where she is today without the help and support from the school board, our principal, the Han Chiang English Centre, Mr Samuel and Ms Yeoh, her family and definitely her teammates: Rhowan and Hoven.

Sarah also mentioned that she would like to improve on her debate and general speaking skills. As this might be her final year participating, she would also like to be more socially engaged and walk away having met lots of people from various other countries. “I hope to do as well as we did in Beijing for the upcoming Tournament of Champion, if not better. It might be an unreasonable expectation seeing as how the competition will certainly increase in difficulty, but we will give it our best go!”