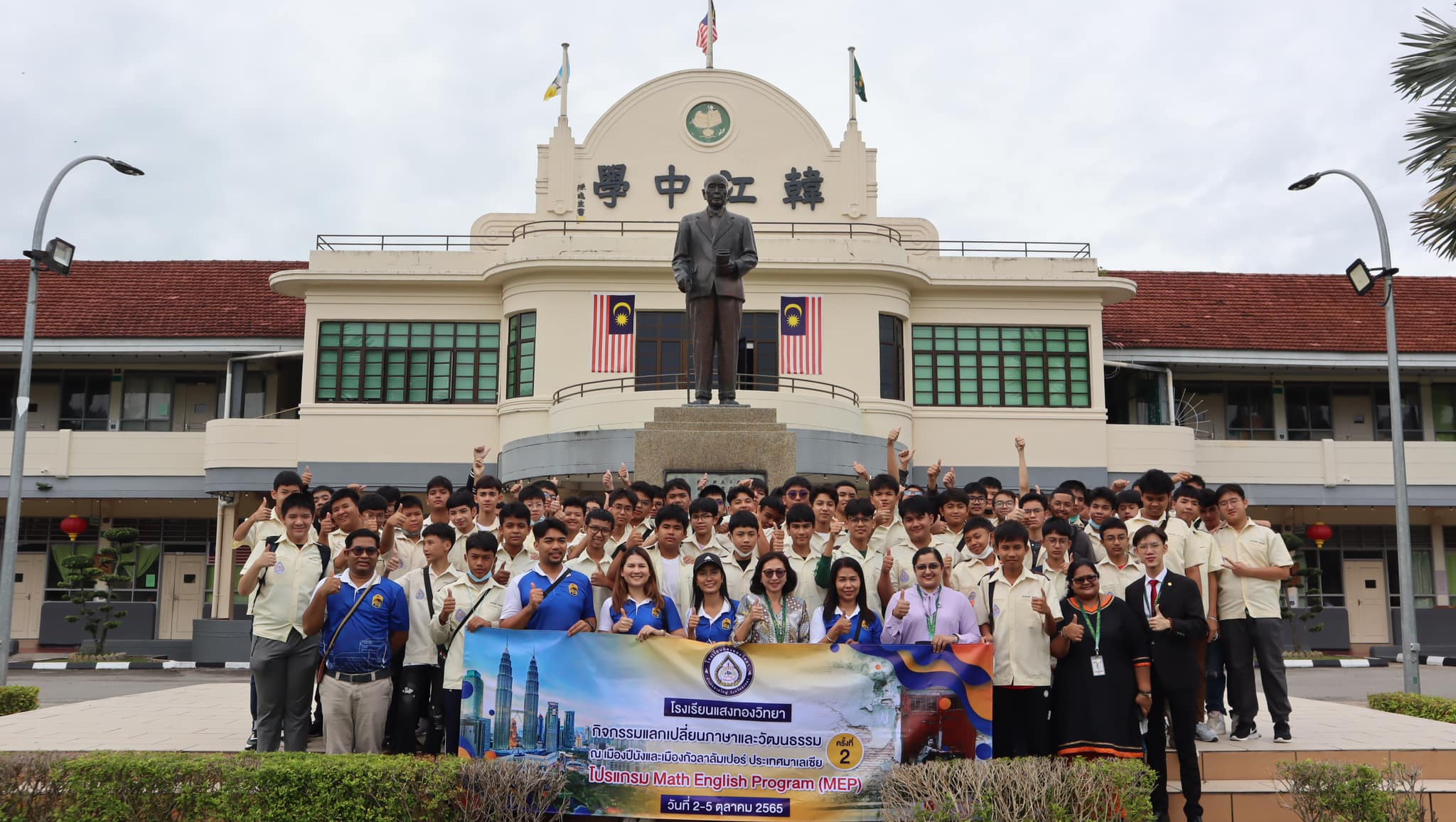 Han Chiang High School was honoured to welcome the students of Saengthong Vitthaya on the 3rd of October (Monday), 2022, from 11 am to 12 pm. They came to Han Chiang from Songkhla, Thailand for an English exchange programme.
Welcoming Arrivals
Group photos were taken at the foot of the Lim Lean Teng statue upon the arrival of the group. Soon after, they were welcomed once again in the MPH with a video introducing the Han Chiang three institutions. The principal of HCHS, Madam Kung Bee Lee expressed her goodwill to the representatives from Saengthong Vitthaya and briefed them on the history of Han Chiang and our educational approach.
Introduction
Han Chiang is named after Han Yu (韩愈), a famous Chinese scholar and a renowned high school in the Northern Region of Malaysia, attaining the 5 Star School Award from the Malaysian Ministry of Education specifically, thrice in 2009, 2012, and 2015 respectively.
Han Chiang has welcomed students from Thailand, China, Taiwan, Hong Kong, and many other countries as well. Amongst the 2000 students that enrolled this year, there are about 59 students that came from Thailand.
Following Madam Kung’s speech, a representative from Saengthong Vitthaya then introduced their school and a brief on their history as well. It is an institution run by Roman Catholics, being one of the 30,000 other schools in 130 other countries around the globe involved in the world of Catholics. The school is located in the middle of Songkhla and is a private all-boys school. They offer primary education up to university courses and various extra-curricular activities for students to choose from. Furthermore, they are more than happy to welcome students of Han Chiang to their school in the future as well.
Extra-curricular Activities
Madam Raginder Kaur, the Chief Operation Officer at Han Chiang English Centre, introduced the curricular activities Han Chiang provides. The Han Chiang English centre (HCEC) had been established back in June 2006, gradually turning to its 16th anniversary this year. She explained in detail the UEC and IGCSE courses the school offers, as well as the cooperation between the English Centre and the British Council, where teachers from the British Council would come to Han Chiang to educate students about the beauty of English in their own unique ways. Although it has been nine years since their first cooperation, the cooperation between HCHS and BC still has a long way to go and is nowhere near an end.
Later, she handed the stage over to Mr Ung Pei Juin. He is the coach of Han Chiang High School’s World’s Scholar Cup debate club – the pride of HCHS – and was established to participate in the international debate held annually. Mr Ung shared the achievements of the club this year which consisted of 94 golds, 51 silvers, and 11 trophies in the WSC Bangkok Global Round Competition. The goal is not only to allow students to broaden their horizons but to also allow them to have a chance to debate on major topics to stand their ground, all to challenge the status quo.
After the speeches, Ms Julie held a lesson on modal verbs and played ability bingo with the students from Saengthong Vitthaya. Finally, they were brought to have a tour of Han Chiang’s school grounds and visited the Han Chiang Chinese Heritage Centre. As time passed by, they said goodbyes and set off to their next stop.
In order to promote our vision, which is to provide high-quality education for students, our school uses the Chinese language and a flexible education system. And to achieve this, our school provides one of the best facilities and education systems in the Northern Region of Malaysia. To continue the principles of Han Chiang, which is to maintain our Chinese culture and to cultivate qualified scholars, our school integrates the Chinese language to promote an advanced education system.
Han Chiang High School provides one of the best facilities and a variety of courses for students to choose from. It has successfully achieved the five-star school award from the Ministry of Education in 2009, 2012 and 2015, through the 17 years of education it has provided for so many students. Our school has welcomed students from Thailand, China, Taiwan, Hong Kong and many other countries as well.
Our students are multilingual due to “素质教育培养素质人才”.
Comments for this post are closed.