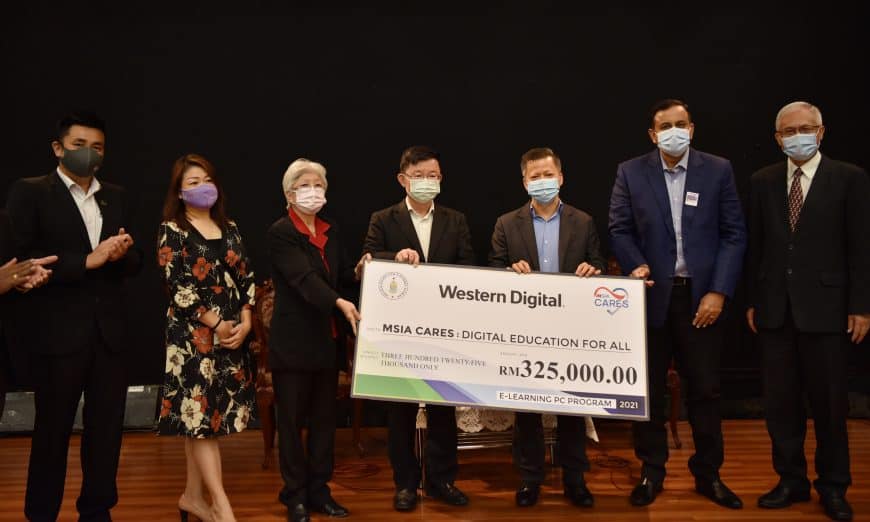 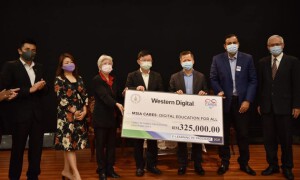 JUST slightly over a month after being officially launched on April 6, the Malaysia Semiconductor Industry Association (MSIA) has achieved its target of getting 1,500 computers to donate them to the Penang E-Learning Computer Programme.

Chief Minister Chow Kon Yeow and state executive councillor Chong Eng, who is in charge of the Penang E-Learning Computer Programme, thanked MSIA for its support in raising funds from its members to make the programme a success.

A total sponsorship of RM2,020,560 was collected from 28 companies, enabling 1,562 laptops to be bought for needy students for their online education. The highest donor was Western Digital with a sponsorship of RM325,000.

“The state government is indeed very grateful to have strategic partners from the industry, non-governmental organisations, individuals and other parties who are always committed to helping the state government while creating an e-learning and e-teaching atmosphere that is more conducive to the students and teachers.

“The state government believes that with this collaboration, Penang is able to remain competitive and realise its Penang2030 vision to be ‘A Family-Focused Green and Smart State that Inspires the Nation’,” Chow said in his speech at the mock cheque presentation ceremony.

Since the programme began in May last year, he said a total of 1,742 computers have been distributed to students with 945 given away free and the remaining 797 given as loans.

In addition, a total of 279 smartphones were also handed over to the needy students.

Chow also raised a question on the status of providing 150,000 laptops to B40 students for home teaching and learning (PdPR) following the Covid-19 pandemic as announced by the Federal Government under the 2021 Budget.

He also wanted to know the number of laptops that have been distributed so far with a breakdown for each state as well as the costs involved.

Chong Eng said for more students to benefit from the programme, the state government has decided to continue with the programme this year by introducing a new scheme, called the computer leasing scheme.

“Under this computer leasing scheme, there are two initiatives introduced, namely ‘Lease to Use’ and ‘Lease to Own’,” Chong Eng said in her speech.

“At a time when the spread of Covid-19 is increasing and having an impact on the education sector, almost all schools have had to close to curb its transmission.

“To help students whose parents could not afford to provide them with computers or smartphones, the Penang government is introducing this ‘Lease to Use’ scheme.

“Thirty-six percent of all students in Malaysia do not have online learning devices.”

Under the ‘Lease to Use’ scheme, she said a total of 100 used laptops (refurbished laptops) would be given a lease loan for six months with a payment of RM1 per day or RM30 per month. Chong Eng said the state government would bear full responsibility for this initiative.

Under the ‘Lease to Own’ scheme, she said the lease term would be for three years and all leased laptops are new.

“After the lease period, the new computer will become the property of the school and this computer can be loaned to other students in need,” Chong Eng explained.

She added that in order for the laptops to be distributed fairly, there were certain criteria and priority would be given to those from the B40 group and single parent families.

MSIA chairman Datuk Seri Wong Siew Hai thanked the state government for establishing the programme and giving MSIA the opportunity to collaborate with them.

“Online classes are becoming more prevalent and the new norm. Unfortunately, many underprivileged and B40 children have not been able to study online. This has caused them to fall far behind due to the digital divide,” Wong said.

“Most of our members felt that how can we not do something for the schools, especially in technology. We think very strongly that we got to do something and that is how this come together.

“We told our members that any contribution is fine; nothing is too small because every single sponsorship will impact every student. So, MSIA would like to thank all sponsors for making this programme a success.

The applications for the Penang E-Learning Computer Programme for this year have been extended to all schools in Penang.

The application period is open from May 7 until May 31. The link to apply is https://elearning.digitalpenang.my/